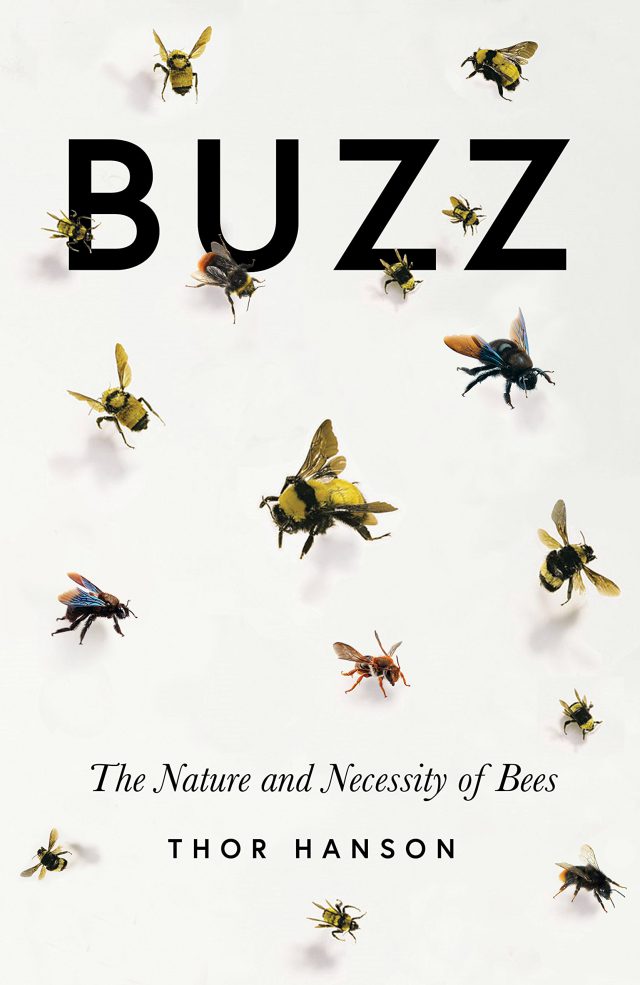 Everyone should be concerned with the status of Bees. They’re the primary pollinators across the majority of ecosystems on this planet, and yet there is little known of the lives lived be these critical invertebrate busy bodies. This podcast by On Point radio is a great interview with Thor Hanson, author of “Buzz: The Nature and Necessity of Bees,” where they discuss the need for conservation of these ancient creatures.

Excerpt from “Buzz” by Thor Hanson

In symbolism and in daily life, the value of bees to people lies rooted in their biology.

The modern bee is a marvel of engineering, with wraparound ultraviolet vision; flexible, interlocking wings; and a pair of hypersensitive antennae capable of sniffing out everything from rose blossoms to bombs to cancer. Bees evolved alongside the flowering plants, and their most remarkable traits all developed in the context of that relationship. Flowers provide bees with the ingredients for honey and wax as well as the impetus for navigation, communication, cooperation, and, in some cases, buzzing itself. In return, bees perform what is their most fundamental and essential service. Yet, oddly, it’s one that people didn’t begin to understand— let alone appreciate—until the seventeenth century.

When German botanist Rudolf Jakob Camerarius first published his observations on pollination in 1694, most scientists found the whole notion of plant sex absurd, obscene, or both. Decades later, Philip Miller’s description of bees visiting tulip flowers was still deemed too racy for his best-selling The Gardeners Dictionary. After numerous complaints, the publisher deleted it completely from the third, fourth, and fifth editions. But the idea of pollination could be tested by anyone with access to a farm, a garden, or even a flowerpot. Eventually, the dance between bees and flowers came to fascinate some of the greatest thinkers in biology, including such luminaries (and beekeepers) as Charles Darwin and Gregor Mendel.

Today, pollination remains a vital field of study, because we know it is more than simply illuminating: it is irreplaceable.

In the twenty-first century, sweetness comes to us from refined sugars, wax is a by-product of petroleum, and we get our light with the flick of a switch. But for the propagation of nearly every crop and wild plant not serviced by the wind, our reliance upon bees remains complete. When they falter, the repercussions make headline news.

Recently, the buzz about bees has often hummed louder than the bees themselves. Die-offs in the wild and in domestic hives threaten critical pollen and flower relationships that we’ve long taken for granted. But the story of bees is much more than a tale of plight or crisis. It leads us from the age of dinosaurs through an explosion of biodiversity that Darwin called an “abominable mystery.” Bees helped shape the natural world where our own species evolved, and their story often comingles with our own. The subtitle of this book guides its content: it’s an exploration of how the very nature of bees makes them so utterly necessary. To understand them, and ultimately to help them, we should appreciate not only where bees came from and how they work, but also why they’ve become one of the only insects to inspire more fondness than fear. The story of bees begins with biology, but it also tells us about ourselves. It explains why we’ve kept them close for so long, why advertisers turn to them to hawk everything from beer to breakfast cereal, and why our finest poets prefer their flowers “bee-studded,” their lips “bee-stung,” and their glades “bee-loud.” People study bees to better understand everything from collective decision-making to addiction, architecture, and efficient public transportation. As social animals recently adapted to living in large groups, we have a lot to learn from a group of creatures who, in part at least, have been doing it successfully for millions of years.

In the past, people around the world heard the buzzing of bees as voices of the departed, a murmured conveyance from the spirit world. This belief traces back to the cultures of Egypt and Greece, among others, where tradition held that a person’s soul appeared in bee form when it left the body, briefly visible (and audible) in its journey to the hereafter. While modern listeners perceive that living vibrato more prosaically, it remains a potent force, amplified by the unconscious urgency of a long and intimate bond. But the buzz about bees does not begin with pesticides, habitat loss, and the other challenges we’ve thrust upon them. It starts with their ascendance, an ancient lesson in hunger and innovation. Nobody knows the exact sequence of events that led to the beginning of bees, but everyone can agree on at least one thing: we know what it sounded like.

Excerpted from BUZZ: THE NATURE AND NECESSITY OF BEES by Thor Hanson. Copyright © 2018 by Thor Hanson. Available from Basic Books, an imprint of Perseus Books, a division of PBG Publishing, LLC, a subsidiary of Hachette Book Group, Inc.