Disaster Report 2018: We saw some of the worst wildfires California has ever experienced as well as the rapid development of massive storms systems that could only be produced under current global climate conditions. Over the course of the past 3 years we’ve seen an increase in the overall frequency and intensity of Natural Disasters. After the 2017 disaster report ranked as one of the most costly years ever for overall damage from disasters around the world, the 2018 report ranks within the top 4 most costly years within the past 30 years.

The trends for storm damage, wild fires, heat waves, and droughts have only risen, while geological events such as earthquakes and volcanic eruptions have remained steady. These trends are indicative of the theories proposed by climate scientists that a warming planet endures more volatile weather patterns, pushing all meteorological & climatological events to extremes yet to be witness in the modern era.

Over the past three years, we have seen an increase in the size and strength of tropical cyclones around the world, most notably the strength and speed of storms emanating in the Caribbean & Gulf of Mexico. Understanding the size and dynamics of these storms will help us better prepare for this trend of super storms.

(SEE ALSO: THE ECONOMICS OF IRMA)

As we face greater frequency in storms, we also face greater drought conditions. With the continued expansion of human settlements into natural areas, we disrupt the disaster return interval of wild fires and floods, creating higher risk scenarios for uncontrollable burns and flash floods.

This year the California Camp Fire caused the majority of damage and insurance claims for the entire year, costing over $16 billion in total losses.

Although there remain many skeptics of the reality we face with climate change, the truth remains that human impact on our planet is creating unforeseen complications in our environment. We are now in the era of the Anthropocene. We only need to walk the beach in any part of the world to find plastic remains from human waste, and our inability to find balance with the natural world.

Our only responsible action is to pursue a resilient & sustainable means of existence, focusing on preparedness, response, adaptive measures for a changing climate, resource management, and low impact practices for energy production and distribution.

Resilient systems must meet a range of different requirements, based on the fact that resilience covers both preparation and damage limitation, and the ability to respond appropriately following an event… resilience is not a static condition, but rather a characteristic of systems that are adaptive, flexible and constantly evolving. – Munich RE

As the disaster intervals continue to increase in frequency and intensity, and insurance companies cover the brunt of claims for damage and rebuilding disaster struck areas, we should focus these resources on rebuilding with an emphasis of implementing resilient solutions that cater to the habitats for which they exist.

Here is a breakdown of the 2018 disaster report from The Weather Channel & Munich Re: 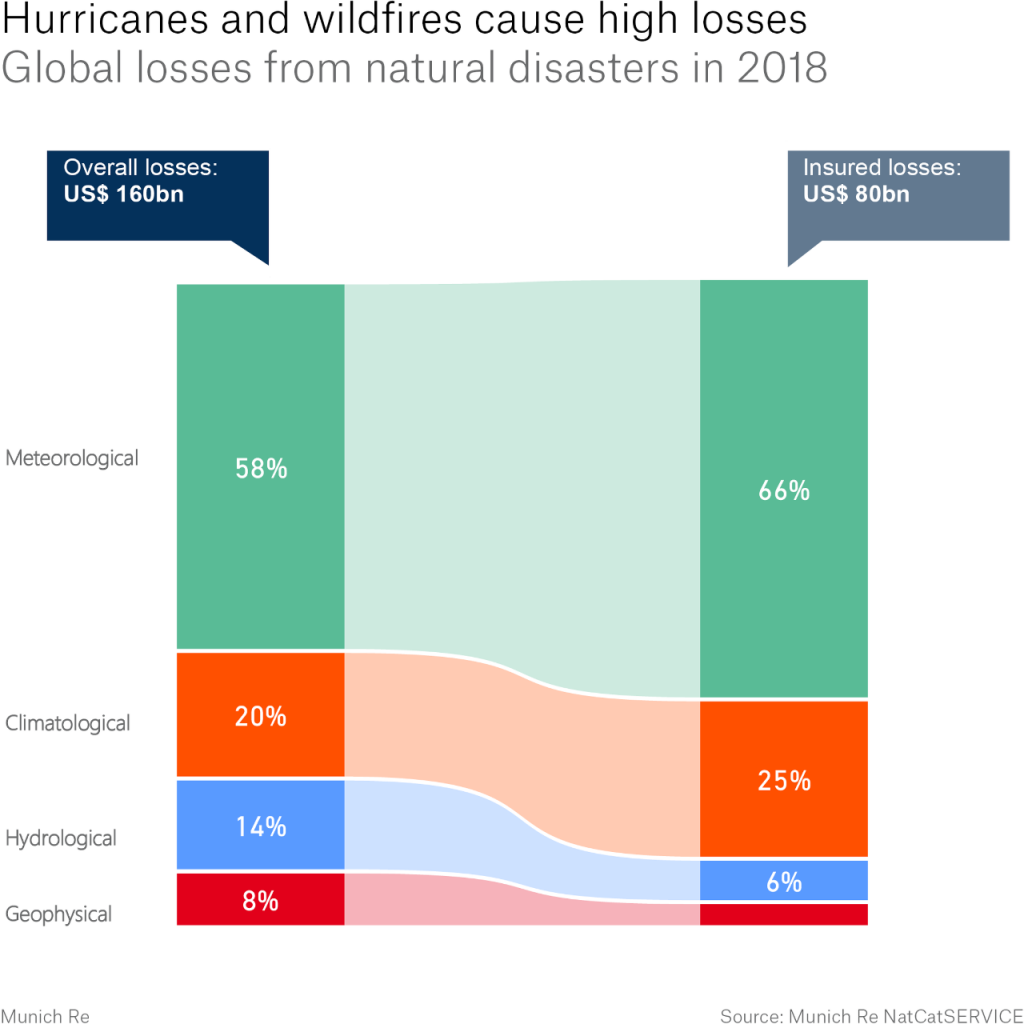 Half of the global overall losses from natural catastrophes in 2018 of US$ 160bn were insured, significantly more than the long-term average

READ THE FULL REPORT HERE. (THE NATURAL DISASTERS OF 2018 IN FIGURES, MUNICH RE)