Nike, with it’s choice of advertising campaigns and sponsorships, will be remembered for being on the bright side of history. Although production and manufacturing have always been an opportunity for the company to do more, Nike has remained an advocate & inspiration for generations of athletes and our culture. Their latest ad campaign, “Dream Crazy,” aired during the 2018 NFL Thursday night season opening game, and already has millions of views online. It is timely as the NFL and Colin Kaepernick are currently in a dispute for “collusion and damages” by NFL teams for not signing him as retaliation for his peaceful demonstration. 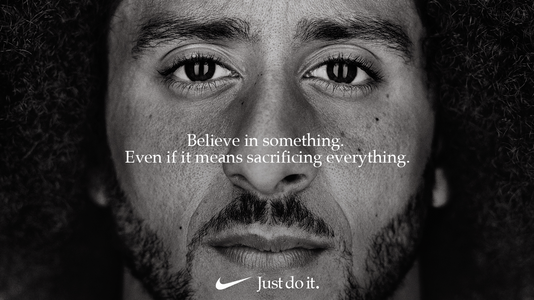 Kaepernick started taking a knee during the anthem in 2016 after being inspired by former Army Green Beret Nate Boyer, discussing ways to honor what the flag represents, while expressing dissatisfaction with the current state of our country.

Reporter: So many people see the flag as a symbol of the military. How do you view it and what do you say to those people?

Kaepernick: I have great respect for the men and women that have fought for this country. I have family, I have friends that have gone and fought for this country. And they fight for freedom, they fight for the people, they fight for liberty and justice, for everyone. That’s not happening. People are dying in vain because this country isn’t holding their end of the bargain up, as far as giving freedom and justice, liberty to everybody. That’s something that’s not happening. I’ve seen videos, I’ve seen circumstances where men and women that have been in the military have come back and been treated unjustly by the country they have fought for, and have been murdered by the country they fought for, on our land. That’s not right

By choosing Colin Kaepernick to be the face of their latest advertising campaign, Nike is making a bold statement that they support the athletes & our communities and not the institutions that suffer from systemic indifference towards social issues that they in fact are perpetuating.

Here’s what you need to know about the current Colin Kaepernick v. NFL situation:

Here’s what you need to know about taking a knee in 2018:

My Brothers @kstills and @ithinkisee12 continue to show their unwavering strength by fighting for the oppressed! They have not backed down, even when attacked and intimidated. Their courage will move the world forward!

“Love is at the root of our resistance!”✊🏾 pic.twitter.com/2kSsX4s7EU